What does Covid-19 mean for your mortgage plans?

The Coronavirus is a tragedy. Here is a deep dive to make sense of the impact on the economy, to help you in your housing and mortgage decision.

This article is based on an extensive review of literature, and available data, discussion with many ex-colleagues and friends, especially in Washington DC: People with first-hand knowledge of the Chinese situation, from leading medical institutions, and those who study the economic fall-out.

A tragedy that is still very much contained

First of all, it is a human tragedy, but in terms of death toll the spread of the virus is still extremely well contained, and the toll does not compare even to normal influenza yet – the death toll of the average influenza season is about 0.1% of those diagnosed and 0.01% of the population: The annual number of death ranged from 12,000 to 61,000 in the US alone in the past 10 years.

The Coronavirus is in principle much more deadly than usual influenza. Estimates of the potential death toll of Covid-19 range from about 1% to 5%.

In the case of the cruise ship Diamond Princess, the death toll was limited to 7 of the 696 infected people, or 1%, despite the median age cohort of the infected being seventy-eighty. In China, the death toll is gradually approaching 4.5%, with higher numbers in Wuhan.

Why this difference in death rates? In the case of the cruise ship, the entire crew and all passengers were tested, and sometimes multiple times. In China, measurement was hard: Testing kits became scarce, and many cases involve estimations. The low incidence of illness among younger people also suggests either a high degree of immunity or non-measurement: The number of people under 20 with tested or reported illness was underrepresented by 80%.

Reflecting such factors, most experts expect a maximum mortality rate in the population in the order of magnitude experienced in the Diamond Princess, i.e. 1%. South Korea and Singapore are examples where the fatality rate is indeed contained in that range (to 1% resp about 0 %)--these countries do widespread testing, making the data also more reliable.⁵

Who is most affected?

The fatality rates in China show a strong age dependence with rates of 15% for the 80+ age cohort, compared to 0.2% in the 40 and under, age is a critical factor and so are prior medical conditions. 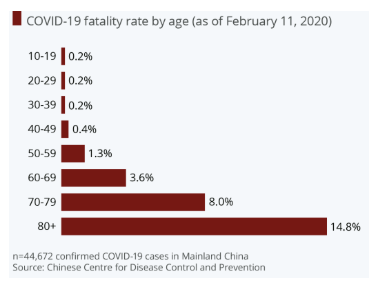 The underlying reasons for fatality are in many cases poor health conditions (COPD, diabetes, coronary disease), rather than age per se. Italy (and Germany) have about 3.5 times as many 80+ years olds as a share of the population, and hence the death toll, and call on medical facilities, could be relatively high if the spread is not curtailed.

Why the disruption to our lives?

To prevent the spreading of the virus which could overwhelm the medical systems, pretty drastic measures have been taken, especially in China and more recently Italy. With 15% of cases requiring hospitalization (per Chinese data), resources can quickly be overwhelmed, unless the pace of growth is slowed from the current 3 to 6-day doubling.

As more and more people are infected in Germany, you can expect more drastic measures, like school closures, and travel restrictions to limit the speed of the spread. Much though will depend on the willingness of the population to observe good preventative care (the handwashing), social distancing, and self-quarantine. The more disciplined people are, the slower the spread. In that sense, we do hope that our German friends live up to their reputation.

What is the economic impact going to be?

The economic impact can be quite substantial. In China, growth has turned sharply negative, with exports down 17% in February year over year. Growth could be negative 5% to 8% in February on an annual basis.

In Singapore, which has done an impressive job in testing for and tracking the outbreak, in contrast, is much less (maybe a 1% to 2% reduction in growth).

The big question is how long this impact will last, and will there be a quick rebound.

What will stop the Coronavirus and the economic impact?

The normal flu abates when enough people have gotten ill, developed immunity, or have been vaccinated. Warm weather helps, but only partially – the Spanish flu extended its massive toll of 50 million deaths on the world population for over two years.

Of course, the race for a vaccine is on, but experts seem to expect that a solution on a large enough scale may take at least a year. Therapeutics might be developed more quickly, with clinical trials already underway.

Governments are not likely to tolerate even the lower bound of the estimated potential death toll rate of about 1%, nor hospitals that no longer can accept patients. And hence we can expect severe disruptions caused by continued curtailment measures, as in Italy. Even when new cases have largely come to a halt as in China, many measures need to remain in place to prevent a renewed outbreak.

In Italy and Iran, which both have relatively good health systems, the Coronavirus has spread wide and far and its spread may be way underestimated given the high death toll in these countries. Given the many countries in the world have much-worth health systems and tracking in place, it is hard to imagine that the curtailment will fully work to stop the spread. And this seems the prevailing view among eminent immunologists.

Hence, curtailment measures and the negative confidence effect on spending are likely to have an economic impact until a vaccine or medicine is ready in volumes that keep flare-ups from spreading. The size of the effect depends on how effective countries respond, i.e. more like Singapore or more like China?

What do the markets say?

We can indeed observe the government bond market, which is one of the best predictors of economic outcomes, reacting strongly. In the US – which so far has relatively few cases – interest rates have dropped over a full percent in under a month. This is quite unprecedented. 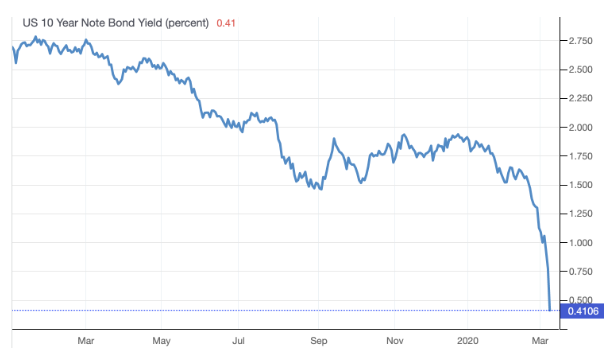 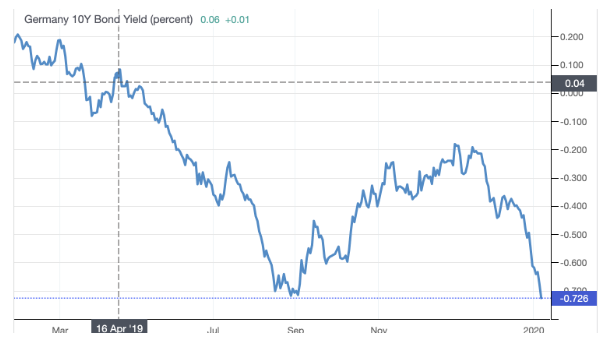 This is as clear a forecast of a recession as you can get. But not necessarily of a depression. The availability of medication, a population that practices effective social distancing and hygienic methods, with a moderate (from a world population growth perspective) overall death toll could lead to a rebound anywhere from 3 to 9 months.

Conclusions for your housing/mortgage journey

The upward price pressure that we have seen in the hot urban markets of Germany may slow. But a decline is not in the cards unless there will be more prolonged selling pressure. The demand is by and large driven by very low-interest rates and job growth in cities.

Selling pressure can come about if many people vacated their homes, or if unemployment shoots up to more permanently.

On balance, we expect, prices and demand to slow, but we don't as yet foresee a drop in the well-priced properties in urban markets, as we expect that Germany manages the crisis more like Singapore than China.

The fatality rate in Germany is 1/10th of the Chinese rate when comparing similar periods of spread, suggesting that Germany is much more like Singapore, and is able to curtail the spread much better.

In other words, in this outlook, you can afford to be pickier, when hunting for a house in these urban markets, but don't stop searching and keep in mind you get the lowest mortgage rates the world has ever seen.

For those who own a home, notably those who have had a mortgage for at least 5 years, this year is an excellent time to refinance that mortgage or lock in your follow-up financing rate. This low-interest period may not last. Typically, markets look half to a full year ahead. And a recession may not last beyond a year.

Mortgage for Blue Card holders: Should you buy now or later?

We explain what options you have as a Blue Card holder to expedite your home purchase, and when it makes sense to wait.

Are houses and apartments overpriced in Germany?

Are houses and apartments overpriced in Germany? What is the actual situation on the real estate market? An analysis.

6 tax law issues that homeowners should be aware of

In this interview with a tax advisor, you will learn about the 6 German tax law issues residential property owners need to know about.