German house prices under Covid: Cause for alarm or chance?

Covid-19 is creating an unprecedented shock to the German economy. Should we be worried if German house prices will decline, or take this as an opportunity to buy?

Here are some pointers followed by our conclusion.

Why is that important? House prices are slow-moving variables. This means it takes quite a bit for a trend to change, as the trend reflects underlying fundamentals, like low-interest rates. There was a strong upward momentum, and it is therefore likely that some upward momentum will be maintained.

After a decline immediately following Covid getting a foothold in Germany, buyer interest has recovered starting about Mid-April. 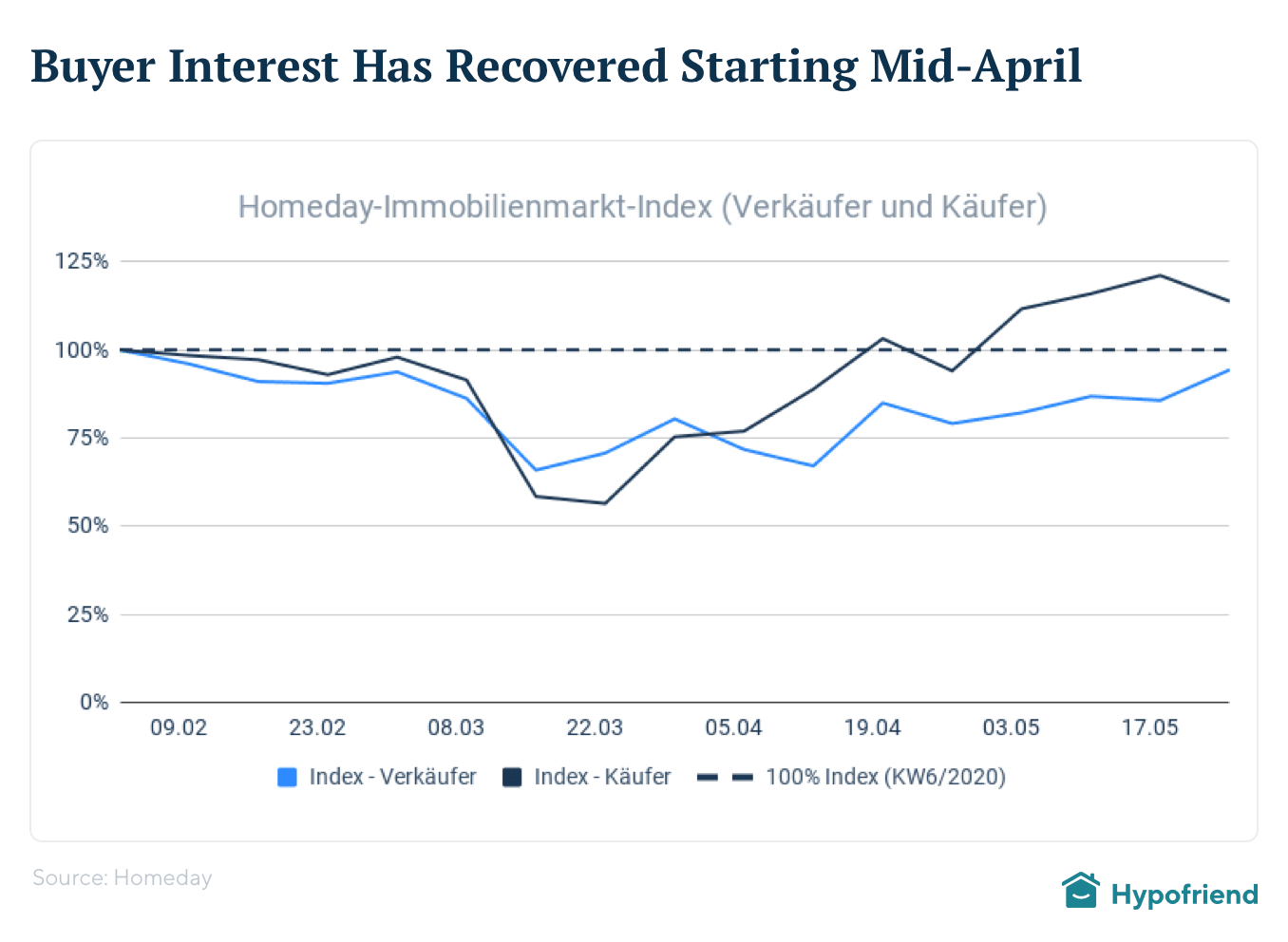 House prices also continue to rise, but frankly, those data are lagging due to the long time it takes to conclude a purchase in Germany and reflect strong buying interest in January and February.

Our own appointments are again up significantly.

Houses are much more affordable than they have been in 30 years, due to the low-interest rates. This will provide impetus to increasing prices. 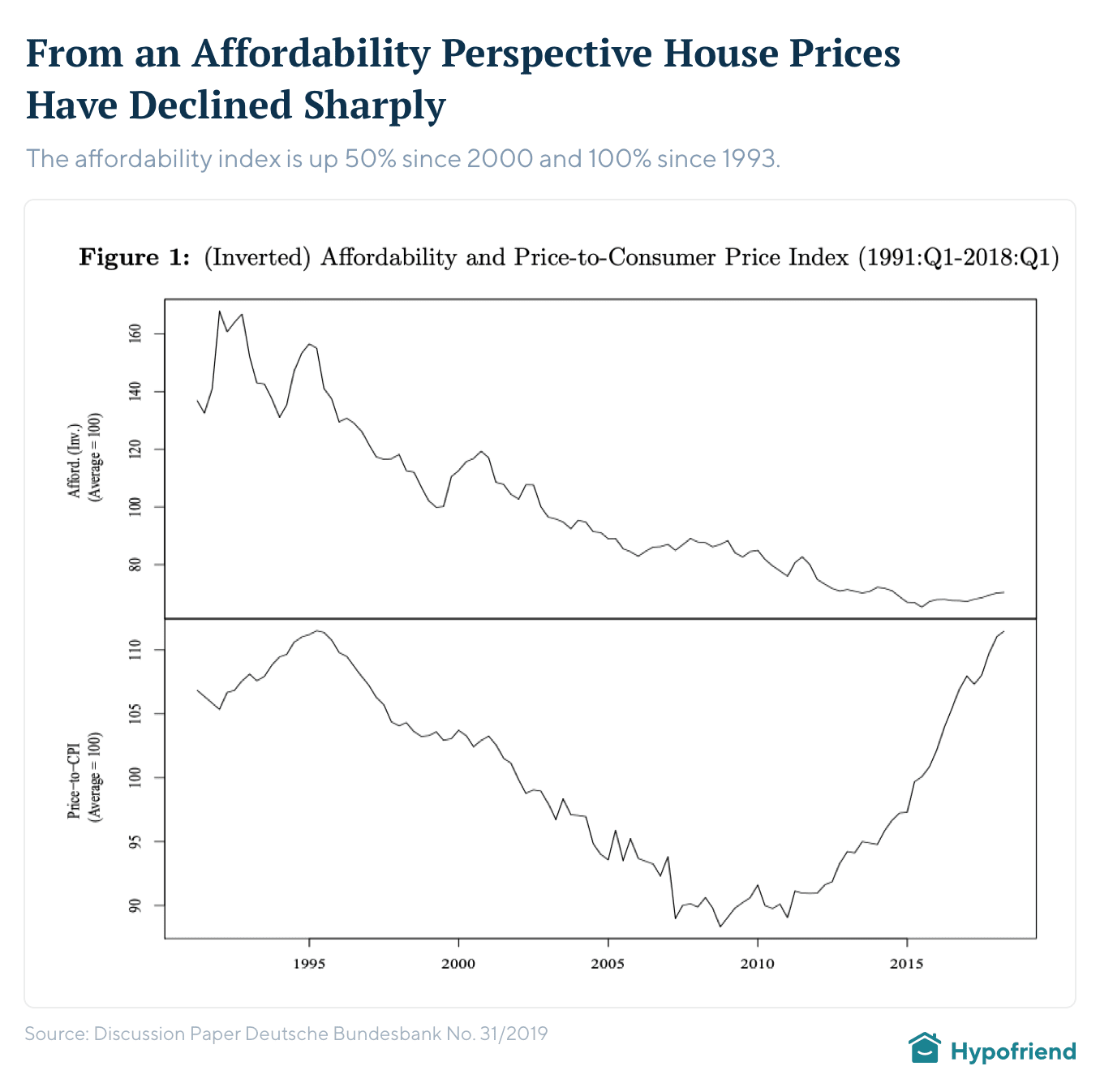 Also, essential is to realize that house prices in Germany declined from about 1970-2010 in real terms, when they increased in other countries. This is also contributing to a very high level of affordability and underpins the underlying upward momentum. 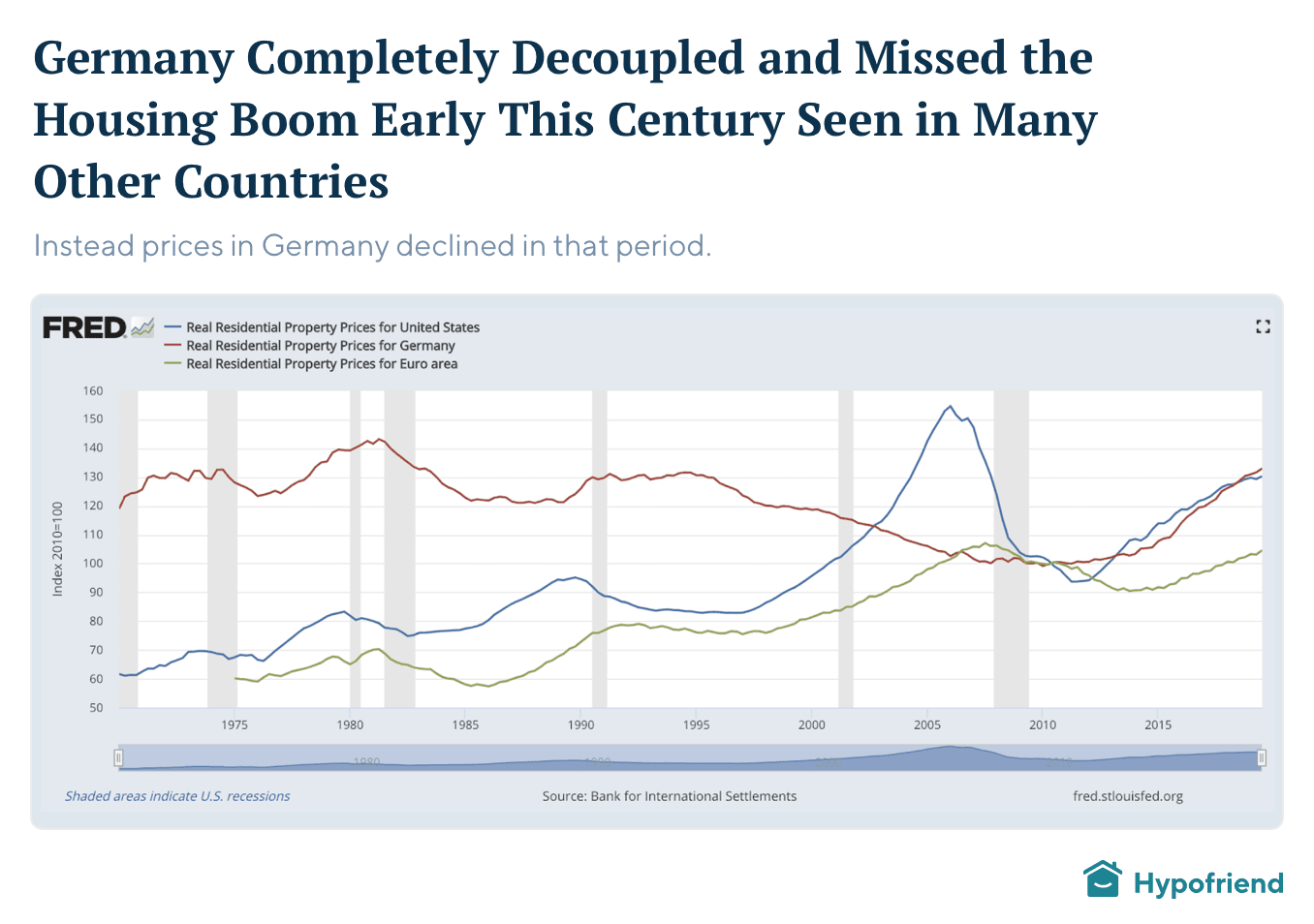 Housing importance is up

With so many people working from home and being sequestered at home, many of us have a new appreciation of the importance of having a nice place to call your home. We even see it among our co-workers.

Unemployment could increase though

Real house prices in Germany correlate well with unemployment. This correlation is strong it seems because unemployment is an indication of prosperity, which in turn attracts immigrant workers – as we have seen in recent years, as well as in the sixties.

Going forward we will see a rise in unemployment that is in part more long-lasting as we will see some sectors (travel and tourism notably) facing a hard time. Other sectors (like IT in Berlin) are likely to continue to grow with the associated influx of highly skilled workers.

In other words, this is a significant negative, but not as much as a general rise in unemployment would be.

Interest rates are still lower than they have been before the outbreak of the crisis. While banks have raised the margins for mortgages somewhat, rates are still at all-time lows.

It takes a lot to have prices decline nominally

House prices have rarely declined in nominal terms in German history. Indeed, this is a trend globally, of people being very averse to taking what they perceive as a nominal loss on the value of their home.

Sellers don't consider the price they bought as a starting point, but the highest nominal value they have estimated for their home. It typically takes forced sales to bring house prices down.

Many factors are pointing to increasing house prices, particularly the momentum up, the high affordability and low-interest rates, and the added appreciation for having a good home. The main negative is unemployment, but we see some mitigation in it being relatively sector-specific.

Our advice therefore is: Do not expect house price declines anywhere soon; rather be prepared for gradual continued price increases. And do expect more scope for bargains as some owners will be wary about the economy.

We spoke with Mr. Scheidacker, lawyer for residential property law, about the Berlin rent cap & other legal aspects of buying a house.

How to refinance your German mortgage?

Here you will find everything you need to know about a forward mortgage and how to refinance your mortgage in Germany.

What does Covid-19 mean for your mortgage plans?

The Coronavirus is a tragedy. Here is a deep dive to make sense of the impact on the economy, to help you in your housing decision.