Rising Interest Rates: Do they affect my mortgage rates?

Internally our message has been, ever since the mildness of Omicron became clear, that interest rates will increase soon. And this is what we see happening now. Rates are shooting up. What is the outlook? And what does it mean for mortgage rates?

The benchmark 10 year German government bonds has gone from about -0.4% in late November when it was discovered that Omicron was highly contagious, to almost 0.2% this morning.

Outlook: How will interest rates evolve?

From a technical perspective (i.e. where the market looks just at price and volume indicators), the market is hitting a peak now, and will likely trade in the 0% to 0.25% range. The next step would be hitting 0.5%, a peak that was repeatedly reached in 2019. 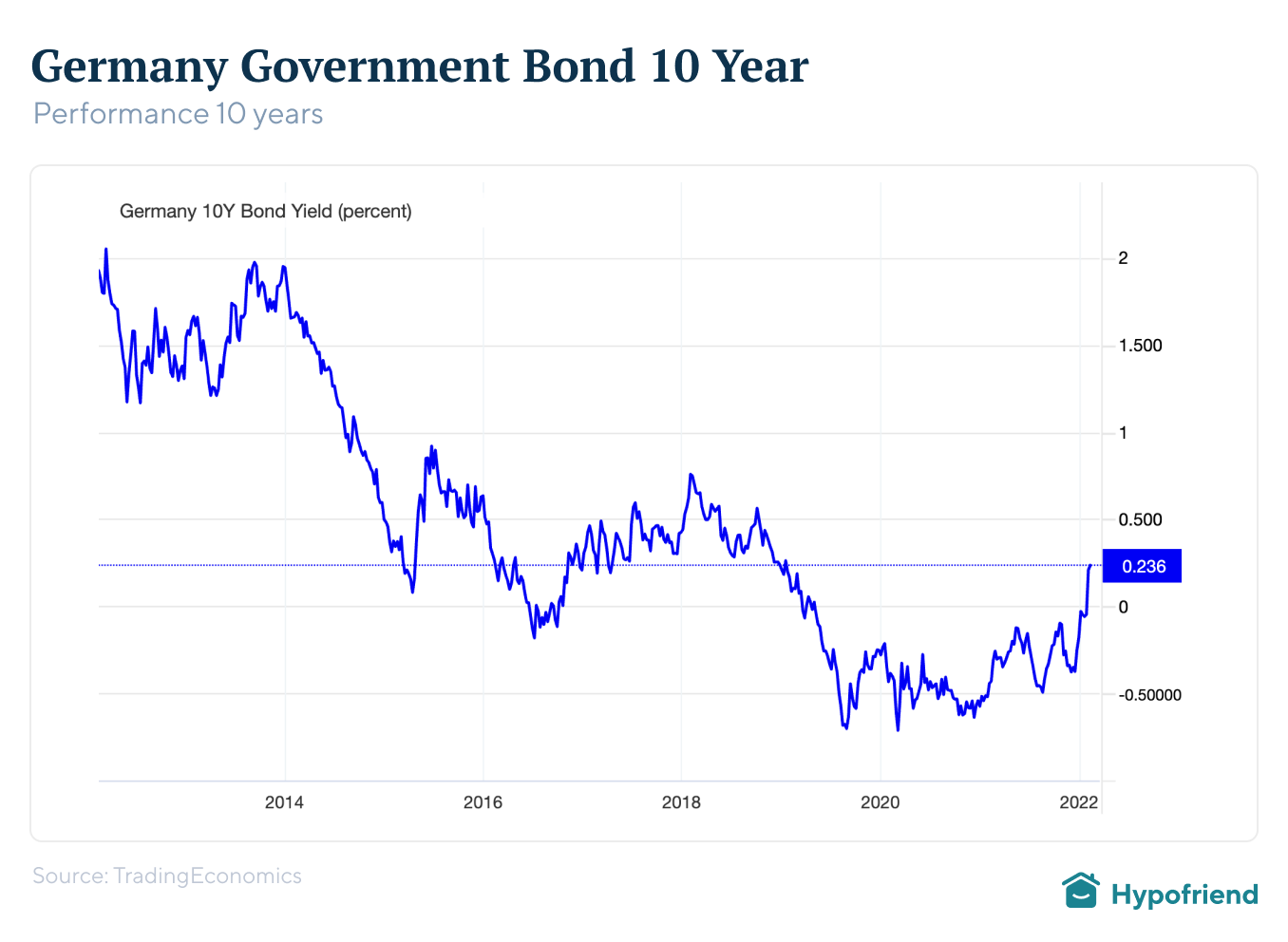 The bond market, which is the best working and most professional market in the world, is still pretty sanguine about the longer term rate outlook. You can see that in the long-term 30 year rates, that have not increased nearly as much as the 0-10 year rates recently. 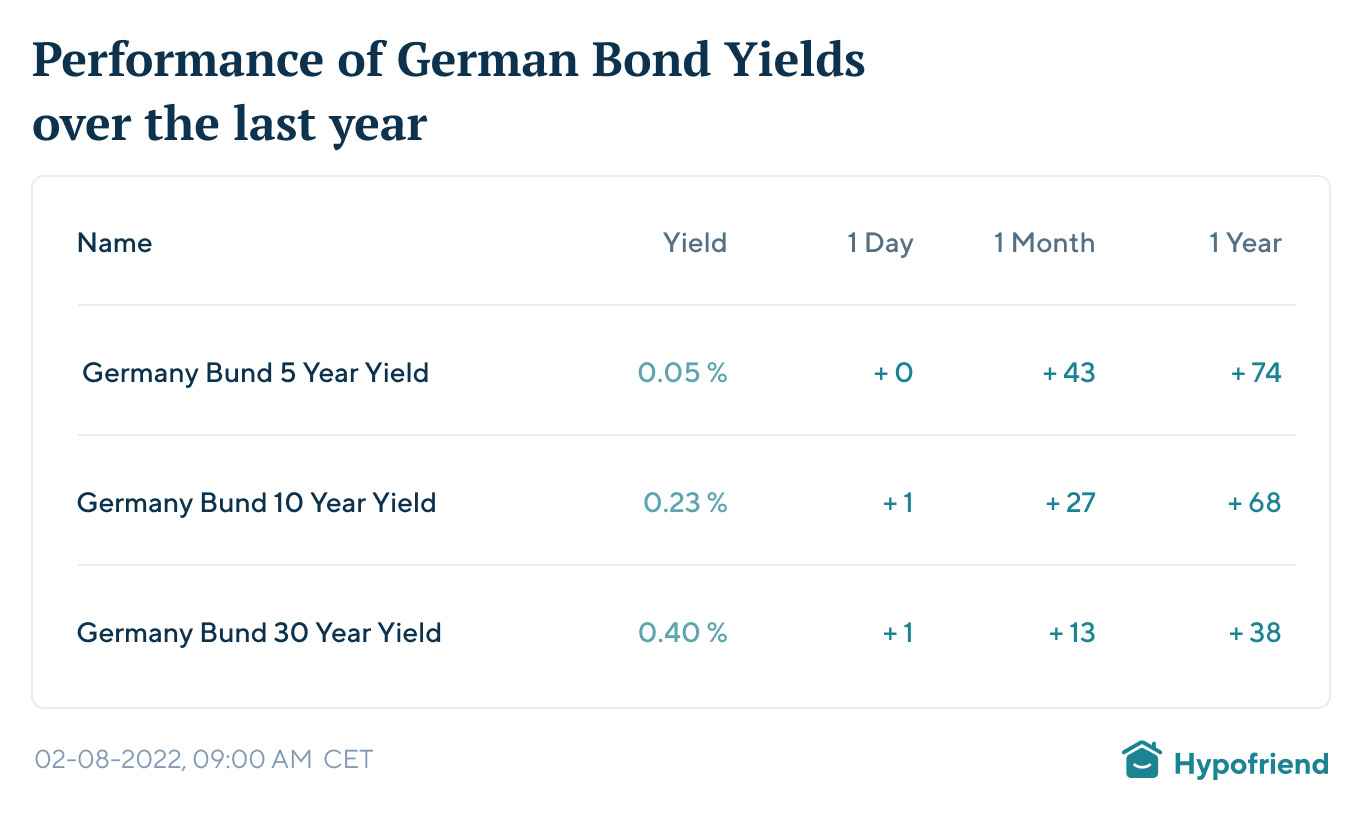 The professionals that take positions in bonds (like pension funds) still believe that the interest increase that we see recently will not last long. Otherwise they would not be willing to invest for 30 years (yes 30 years!) at 0.3%.

Their logic is that supply bottlenecks drive the current high inflation. But it won't last. For example while overall German inflation came in at 5% for January, core inflation (i.e. for all stable items) was just 1,6%. In other words: All the bottlenecks like the shortfall in chips, or the high gas prices are temporary and their effect on inflation will disappear, leaving us with a core inflation around the 2% target.

In my view, there is still a fair chance that the central banks like the European Central Bank underestimate the persistence of inflation. In other words, workers who see their purchasing power erode will demand higher compensation, and this in turn leads to higher prices and requiring a stronger interest rate response. Indeed I would not be surprised for the 10 year interest rate to hit 1-1.2 %. After all countries have started to run large fiscal deficits and these need to be financed.

What does it mean for your mortgage?

Expect higher mortgage rates in the next few days. Banks do typically respond with a few days lag. The recent increase is too large to ignore.

And over time rates will increase further. Not massively. In a historic context a bond rate of 1-1.2% is still very, very low. As companies, individuals and governments are all relatively indebted due to the low rates, an increase also has a relatively higher impact, so an increase will slow the economy quicker and thus help to reduce inflation. Also the underlying savings glut on the corporate side and due to aging populations persists. So the long term reason for modest interest rates remains unchanged.

For you as a mortgage customer it means rates are likely to move over the course of this year and next into the 1.5-2.5% range. The impact on house price will in our view be a slow down, but not a decline as the momentum is so strong in the market and interest rates are still historically very low.

Home affordability: Buyers can now afford up to 24% more house

A new law regulates the payment of the broker's commission in a new way. This affects how much house buyers can afford.

Fewer building permits were issued in Berlin in 2020 than in the previous year. This will further exacerbate the situation for purchase prices.

The consequences of the Berlin rent cap ruling

The Berlin rent cap was declared inadmissible. We explain what this means for tenants and property owners.