- Launch of Hypofreundinnen, a network for women interested in buying their own home. - Women tend to get on the property ladder later in life than men, if at all, leading to a larger income deficit at retirement. - The median women can afford 7.57 percent less property than the median men.

Berlin, 08. March 2021 --- On 8th March, International Women's Day is celebrated. For over a hundred years, women have been drawing attention to the lack of equal rights on this day. This is still necessary in Germany as well. After all, figures from the Federal Office of Statistics show that women are still at a disadvantage when it comes to pay, for example. According to these figures, women earn 20 percent less than men. Converted to gross hourly wages, this is a deficit of 4.44 euros per hour.

In the long term, this wage gap has significant consequences for women. They are less able to save, provide for and invest. It is, therefore, no wonder that women in particular are affected by poverty in old age. The housing cost burden in old age represents a particular poverty risk. This is because while income decreases with retirement, fixed costs do not change. The German Real Estate Association only recently determined that the housing cost burden for almost two-thirds of rental households with a reference person aged 65 or older is already more than 30 percent of net income. When compared to renters, real estate owner’s share of income devoted to housing costs lies flat at just 10 percent.

Hypofreundinnen: The network for women interested in buying real estate

Statistics on the share of real estate bought by men and by women, do not exist. Clichés around finances, money, and investments being male-dominated topics, as well as a proven higher risk readiness, strengthen the picture of male-heavy real estate buyers. The analysis of Hypofriend's data supports the assumption. "We found that just 36.6 percent of single applicants are women. For applications with a partner, where the initiative came from the woman, it is even only 27.8 percent," explains Hypofriend CEO and co-founder Nick Mulder. "It was clear to the Hypofriend team and me that helping women get into real estate is a key opportunity to help them be prepared for retirement. That's why we launched the Hypofreundinnen-Initiative."

The goal of Hypofreundinnen is to create a network where women can support each other in becoming financially independent. "As a community, we want to exchange experiences and knowledge, deepen our knowledge, learn new things, and go down new, independent paths together - regardless of whether it's about buying your first home or securing your retirement through smart real estate financing," says Linda Janzing, Talent and Operations Manager at Hypofriend and co-initiator of Hypofreundinnen, concretizing the mission.

Many women are afraid to get involved with real estate. "Some believe they can't afford to own their own home because they don't earn as much as some of the men around them. But we know from experience that this is often not so," tells Nicole Weichert, senior mortgage expert at Hypofriend. To show women how much house they can actually afford, Hypofreundinnen regularly hosts talks and webinars. "However, this is not just about bare figures. We also address questions, fears, and concerns to open up new perspectives."

Women can afford more than they think

“Many women don’t realize that even with an average income and low five-figure savings, they can afford to own an apartment,” Weichert explains. In most cities, apartment prices range between 4,000 euros and 5,000 euros per square meter. For the first apartment of 40 square meters, buyers would typically look at a price of around 200,000 euros. This amount sounds daunting for most women, but in reality, they would only need an income of 2,000 euros and savings of 16,000 euros, if sold without a real estate broker. “It’s important that women get on the property ladder sooner. By owning where they live, they immediately gain from their rental savings and benefit from the appreciation of the property,” she adds. Women often think they need more savings than men. But in general, only the additional costs of the purchase should be covered by the savings.

This is what the typical female property buyer looks like

But what does the typical female property buyer look like? The review of Hypofriend’s home buyer data, for the first time, gives insight into the financial situation of female buyers in metropolises and large cities.

The average female property buyer is 35.74 years old at the time of purchase and has a median income of 3,500 euros. The median amount of equity contributed to the financing is 70,000 euros. The maximum purchase price, or ‘affordability’, which results from the income, the equity, and the repayment, is 325,233 euros. However, the financing amount ultimately applied for is just under 40,000 euros less, showing that most women borrow below their capacity.

Male singles are almost two years younger than women when buying property and have more savings (median 80,000 euros), while their income is almost the same (3,490 euros). However, affordability and the amount of financing requested are 7.57 percent and 11.25 percent higher, respectively.

"In summary, although women have the same income as men at the time of purchase, they are almost two years older. The lower savings at the time of purchase result from the gender pay gap in the early years of their careers, when women earn less than men and can save less as a result," Mulder said, explaining the analysis data. "Personally, what we're most pleased with is that when women start looking at home buying, their confidence increases. They see that they can afford more than they think. Comprehensive advice and financing proposals tailored to their life situation encourage women to take the path to homeownership." 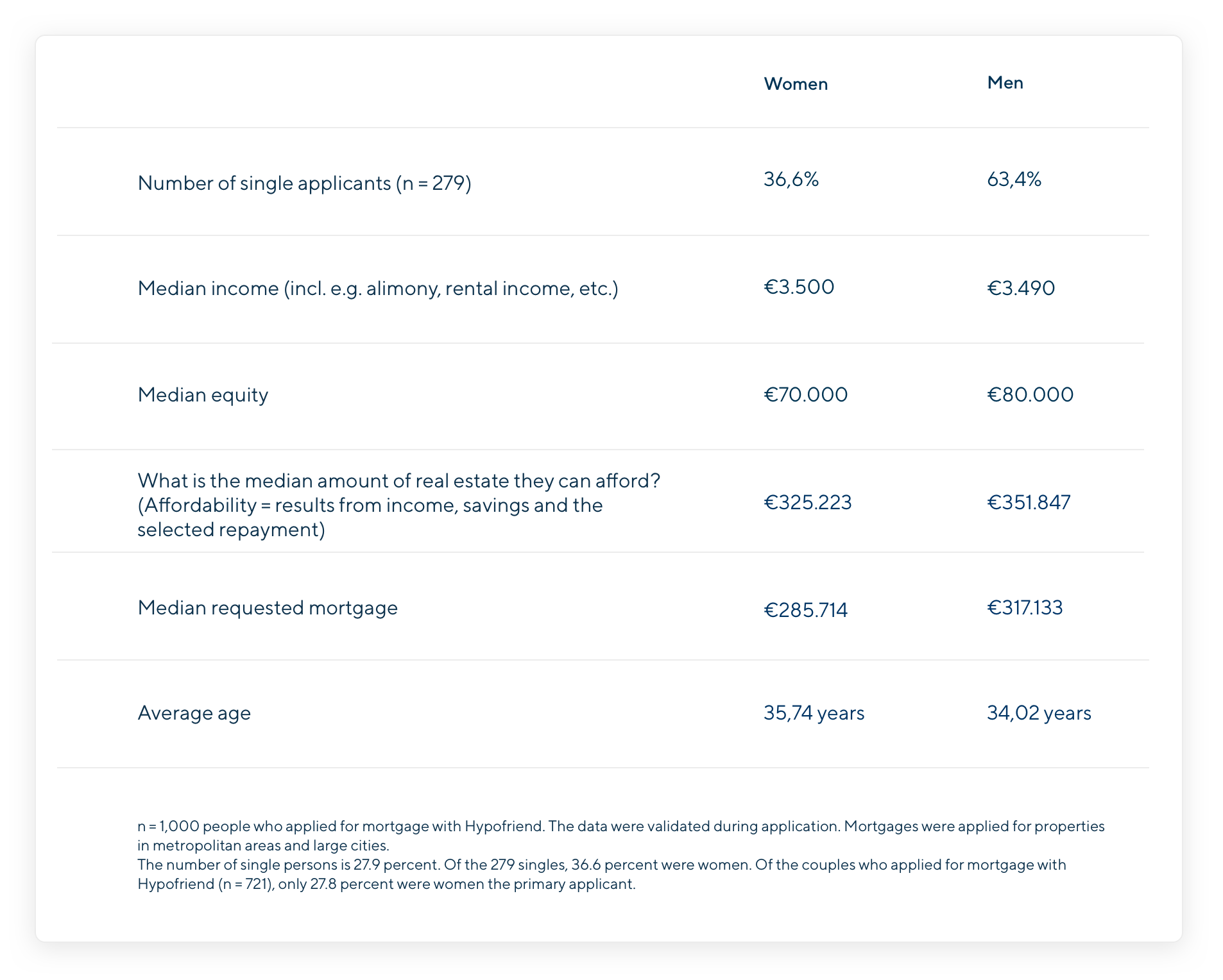 Hypofriend is Germany's fastest-growing independent mortgage advisor. Founded in 2017 by Nick Mulder, his father Dr. Christian Mulder, and later by Pavel Jurasek, the startup helps its customers make smarter financing decisions. Through its self-developed advisory and recommendation software, complicated correlations are presented in a detailed and understandable way. The team of nearly 60 engineers, economists and mortgage experts has already helped thousands of customers better understand housing finance and fulfill their dream of buying a property in Germany.